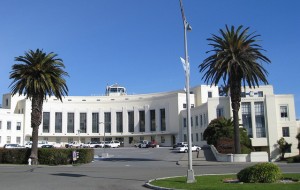 San Francisco has hosted three World’s Fairs. The first was the the 1894 Midwinter Fair in Golden Gate Park; the second was the 1915 Pan-Pacific International Exposition in the Marina. This year marks the 70th anniversary of the Golden Gate International Exposition, San Francisco’s third World’s Fair, which took place in 1939 and 1940 on the newly-created Treasure Island in San Francisco Bay. As anyone who curates exhibits using historical materials knows, there’s nothing like an anniversary to give you a theme.

As one might explect, all three exhibits are publicized on websites. It is interesting to note differences in design among those three sites – especially in terms of taking advantage of web functionality such as linking. The website for the Skylight Gallery includes a link to the San Francisco History Center’s online historic photo collection – specifically, a page highlighting that collection’s holdings as they relate to the 1939 World’s Fair. The website for the Presidio Officer’s Club exhibit includes a link to the website of the Treasure Island Development Authority, which includes a history page that includes links both to the San Francisco History Center’s online 1939 World’s Fair photographs, as well as Treasure Island-related podcasts from Richard Miller’s Sparkletack website. The San Francisco Airport Museums does not include any links on the website about their exhibit, and is the most Web 1.0 in its presentation.