Robert Aitken’s 1903 sculpture atop the Dewey Monument. Alma de Bretteville was the model. The trident represents Admiral George Dewey’s naval victory. The wreath honors the memory of U.S. President William McKinley, who was assassinated in 1901 by Leon Czolgosz. 2008 photo by Carnaval.com Studios.

Although the U.S. declared victory in the Spanish-American War, Filipino insurgents continued to fight for their independence – this time, against the United States. That conflict – the Philippine-American War – began in 1899 and lasted until the U.S. military quelled the rebellion in 1902. Again, U.S. troops were deployed through the Presidio in San Francisco. Thus, in both the Spanish-American War and the Philippine-American War, military personnel were sent through one former Spanish colony (San Francisco) to fight military personnel  in another former Spanish colony (the Philippines).

In the year following the conclusion of the Philippine-American War, the Dewey Monument, a collaboration of sculptor Robert Aitken and architect Newton Tharp, was dedicated in San Francisco’s Union Square. The monument commemorates Admiral George Dewey’s defeat of the Spanish in Manilla Bay in the Philippines, and celebrates the American victory in the Spanish-American War. 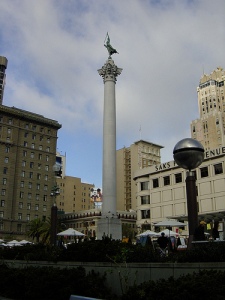 The Dewey Monument in Union Square. 2006 photo by Robert Cutts.

Now, over a century later, the Dewey Monument is the subject of a new collaborative work by local artists. On May 25-28, 2012 at 8:00 p.m., “Bitter Melon” will be performed in Union Square as part of the annual Union Square Live program. Ben Wood and his technologist, David Mark, will do large-scale 3D video projections on the Dewey Monument, while choreographer Raissa Simpson and her Push Dance Company will use dance and movement. Their project reinterprets the significance of the Dewey Monument by drawing attention to the costs of war and by considering the ways that war can set human migrations in motion – including the resettlement of Filipinos in the San Francisco Bay Area.

Wood and Simpson, the lead artists, are approaching their interpretations of the Dewey Monument in slightly different ways. Wood is focusing primarily on the Philippine-American War and subsequent attempts by the United States to extend its military influence in the Pacific Rim. He is combining previously-existing film and video content with original material. For the images that he will project onto the Dewey Monument, Wood’s sources include a personal Philippines travelogue film, “Message to Magellan,” as well as his own photographs of cannons in San Francisco’s Presidio that date from the days when California was under Spanish control. Using the soundtrack of the Phoenix Learning Group’s 1974 documentary “The Lure of Empire: America Debates Imperialism,” Wood has selected actors’ spoken recreations of the testimony of Emilio Aguinaldo, Mark Twain, and other participants and contemporary commentators on the Philippine-American War.  Wood will combine these sound recordings with original music composed by José Gimena and performed on traditional Filipino instruments.

A sample of the images that will be projected in 3D on the Dewey Monument by Ben Wood and David Mark.

Regarding public monuments, Wood commented to me,

We often ignore them. There’s a thousand people walking around Union Square not paying attention to the Dewey Monument. How can we bring this story to life? What would happen if we looked at the monument as having been complicit in the notion of war as glorious? What if we looked at it as a living thing that’s been a witness to the horrors and tragedies of war?

Whereas Wood will be depicting specific persons and events, Simpson is taking a different approach. She has drawn on stories from her own Filipino and African American heritage to inspire the Push Dance Company’s performance in “Bitter Melon.” In particular, she has turned to the her family’s experience of the Great Mississippi Flood of 1927, which she speculates may have galvanized the migration of African Americans from the South to other parts of the United States in a way that foreshadowed the later migration of African Americans from the South to San Francisco during World War II. Simpson has also drawn upon her family’s experience during the Philippine-American War. During that conflict, American military personnel subjected Filipino prisoners to a form of torture called the “water cure.” Simpson was struck by the way in which water – something necessary for human life – had galvanized her family to migrate in order to escape flood and torture. The conflicting meanings of water are highlighted in the performance’s title. Bitter melon is a watery vegetable that figured prominently in the Filipino foods that Simpson ate as a youth. Her family had left the Philippines – and the devastating ways water was used there – yet brought the practices of making and sharing watery, life-giving food with them.

This is a piece about what happens to people when they are subjected to violence, tragedy, forced labor, natural disaster. What does that do to people? I told my dancers they’re not necessarily portraying anyone in historical times. I don’t rely on the dancers to tell the story. I’m dealing with the emotionality. I asked my dancers – what was the first time that you had to leave home, the first time you migrated? How did you end up in San Francisco? What compelled you to stay? It’s important to realize that people back then came to San Francisco for some of the same reasons that you and I did.

“Bitter Melon” will be performed May 25-28, 2012 at 8:00 p.m. in Union Square. The event is free and open to the public. For more information, please visit the Push Dance Company website.