Recreating the Mission Dolores Mural in a New Setting 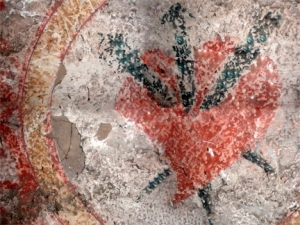 In 1791, local Ohlone artists painted a 20′ x 22′ mural on a wall of the sanctuary at Mission Dolores. Currently, however, that mural is hidden behind a massive 1796 reredos, or wooden altar. In 2004, artist Ben Wood and archeologist Eric Blind devised a means to digitally photograph a 5′ x 22′ portion of the mural without moving the altar – a project that earned them the 2004 Governor’s Historic Preservation Award. Now, Wood is overseeing a project to recreate that portion of the mural in a public setting a few blocks away.

Wood consulted Annice Jacoby’s 2009 publication, Street Art San Francisco: Mission Muralismo, and found the names of artists Megan Wilson and  Jet Martinez – both of whom have been active in the Clarion Alley Mural Project. Martinez was interested Wood’s proposal to recreate the Mission Dolores mural, and had already been in communication with Jeremy Shaw, Executive Director of the Mission Community Market, about the possibility of creating a mural on the wall of Mission Market at 85 Bartlett Street (between 21st and 22nd Streets). The Mission Community Market (MCM) is a nonprofit that began in 2010 as part of the San Francisco Planning Department’s Mission District Streetscape Plan. It organizes a weekly open-air farmer’s market at Bartlett and 22nd Streets that also provides a venue for local Mission businesses and arts and youth organizations. Shaw had been meeting with neighborhood business owners about the possibility of putting murals on the walls around the MCM. Martinez, Wood and Shaw felt that a recreation of the Mission Dolores mural would be an appropriate beginning for a larger mural project in the area. The owner of Mission Market was amenable to having the mural painted on the outside of his store; and through Megan Wilson, Ben Wood met two other local artists – Bunnie Reiss and Ezra Eismont – who, along with Martinez, signed on to paint the mural.

Wood has invited Mission Dolores staff to collaborate on an interpretive panel that would accompany the mural, in the hopes of highlighting the stewardship and programming at Mission Dolores in relation to its historic resources. Wood has also consulted with Charlene Sul, Chair of the Advisory Council for The Confederation of Ohlone Peoples about the project. More recently, Wood has been in conversation with Sul’s son, Anthony, about the possibility of his participation in the painting of the mural. Through these and other Native contacts, Wood has been soliciting input about the mural’s creation, presentation, and interpretation.